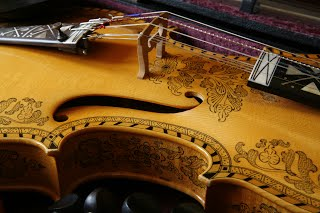 Since we’re pulling out a couple of instruments that we haven’t featured before at a Hurly Burly concert, we thought a short write-up on how cool they are might be in order! (Descriptions courtesy of Cindy Ellen Morgan). 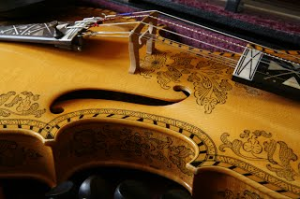 The Hardanger Fiddle: Named after the Hardanger region of Norway where the earliest known example (dated 1651) was made, the highly-decorated hardingfele has four strings like a regular violin, and another four which run under the fingerboard and are not actually bowed. It is the instrument traditionally played for dances and was also used to lead wedding processions to church. However, the “wild dancing” associated with the hardingfele led to it being banned from inside the church in the 1800s, and it was rumoured that the best players learned from the Devil himself! 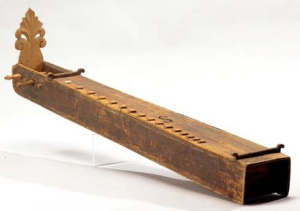 The Scandinavian Zither/Dulcimer: A cousin to the mountain dulcimer played in Appalachia, this instrument goes by several regional names and each has slightly different characteristics. The langeleik is played in Norway, the langspil in Iceland, Scheitholz in Germany, Hummel in Sweden, and Epinette des Vosges in France. The earliest surviving instrument is from the early 1500s in Norway. The instrument Cindy Ellen owns has the boxy appearance of an earlier version of these “chordophones”; the instruments being played in Scandinavian folk music today are more curved to be louder.

Both of these instruments were tuned quite differently in the past than they are today, with many regional variations noted. A hardingfele player might use several tunings for an evening’s dancing. Today, though, both use scales recognizable to modern ears.

We’re looking forward to playing with these on Dec. 1st, and hope you will enjoy them too!